Hi fellow Redditors and loyal users of ReddHub. Some of you had been asking to see data on ReddHub and we figured we would share some data with you all now that we have been on the platform for a bit more than a year.

We’ve put together a collection of various datapoints collected from the ReddHub Reddit App on Windows 8. Hopefully you find the data as interesting as we’ve found it. If there’s something missing and you’d like to see, please let us know!

Notes:
All data is for the range – Dec 2012 to Dec 2013
Axis have been removed in some cases to protect sensitive data

As you can see from this chart, immediately after release we spiked in users fairly quickly. Since then, we have maintained a fairly linear increase in users over time. There are a few events that stand out, such as a spike in June 2013 where we released v5.7 and were featured in articles such as Best Apps for Surface on WinRTsource.com, and the spike in Oct 2013 with the release of windows 8.1.

The installs graph is even more interesting, you can clearly see the points where we released updates and the huge spike both when we first released and when Windows 8.1 came out. At the end of April 2013, Reddhub was featured in the store as a Surface Pick which caused a noticeable increase in new installs. As Windows 8.1 was released in Oct 2013, Reddhub was called out as a favorite in the official AMA and was also featured in an app developer blog by Microsoft, resulting in our largest spike of new installs to date.

Breakdown of users per version

This chart is interesting as it shows you just how many updates we have released and the amount of time in between each. While a bit hard to see, in earlier updates there was always about 1-2 months where there was still a decent handful of users on an older version. However, with the release of 8.1 and its auto update functionality, we have noticed a near immediate uptake of new versions recently with only a small handful of people lagging behind. You can also see the orange area in Oct 2013. Here is where 8.1 was released and the app was forked into an 8 version and 8.1 version. The usage of the 8 version dropped off fairly quickly and while we have released a few updates to the 8 version to fix issues, the total # of users on the 8 versions compared to 8.1 are well below 10% already.

What’s interesting is that the average time a user spends in the app has also slowly increased. Users seem to browse for about 15 minutes at a time and about 30-45 minutes per day. The fact that this has been steadily increasing shows both how much our users love Reddit but also that they use Reddhub more and more as their primary browsing source! Thanks everyone! With very few outliers, Tuesdays appear to be the day where people spend the most time Redditing.

Some additional interesting questions that can be answered

1. What’s day of the week is the app used the most?

As mentioned above, the data shows that with only a few exceptions, Tuesdays are the days where people use ReddHub the most. Post Tuesday-usage goes down day by day until Sunday. Sunday and Monday see increases until the peak on Tuesdays.

2. What percent of day on average is a user in Reddhub?

Users spend approximately 2.5% of their entire day on Reddhub each day. Tuesdays are closer to 3% while the slower days are closer to 2%. Remember, this is just how much time they spend on Reddit via ReddHub. If you are like us, you likely use Reddit on your smartphone and maybe on a non-Windows8/8.1 computer at other times of the day as well. So these numbers are only the lower bound of how much you all Reddit.

3. What’s the most popular device Reddhub is used on? 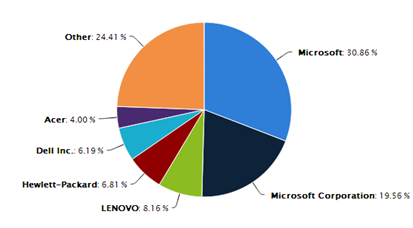 By far our users are mostly on Microsoft devices (~50%). This is a combination of various Surface devices

4. What are the most popular countries using ReddHub outside of the US?

The data makes sense and is not very surprising given both ReddHub is not localized into other languages and neither is the content on Reddit.

@Betinem @XboxOne Not in our current roadmap, but we can revisit someday. Thanks for using Reddhub!

@CaptCrash32 try toggling between optimal and original, does it help at all? for the imgur ones, those often load a few seconds later.